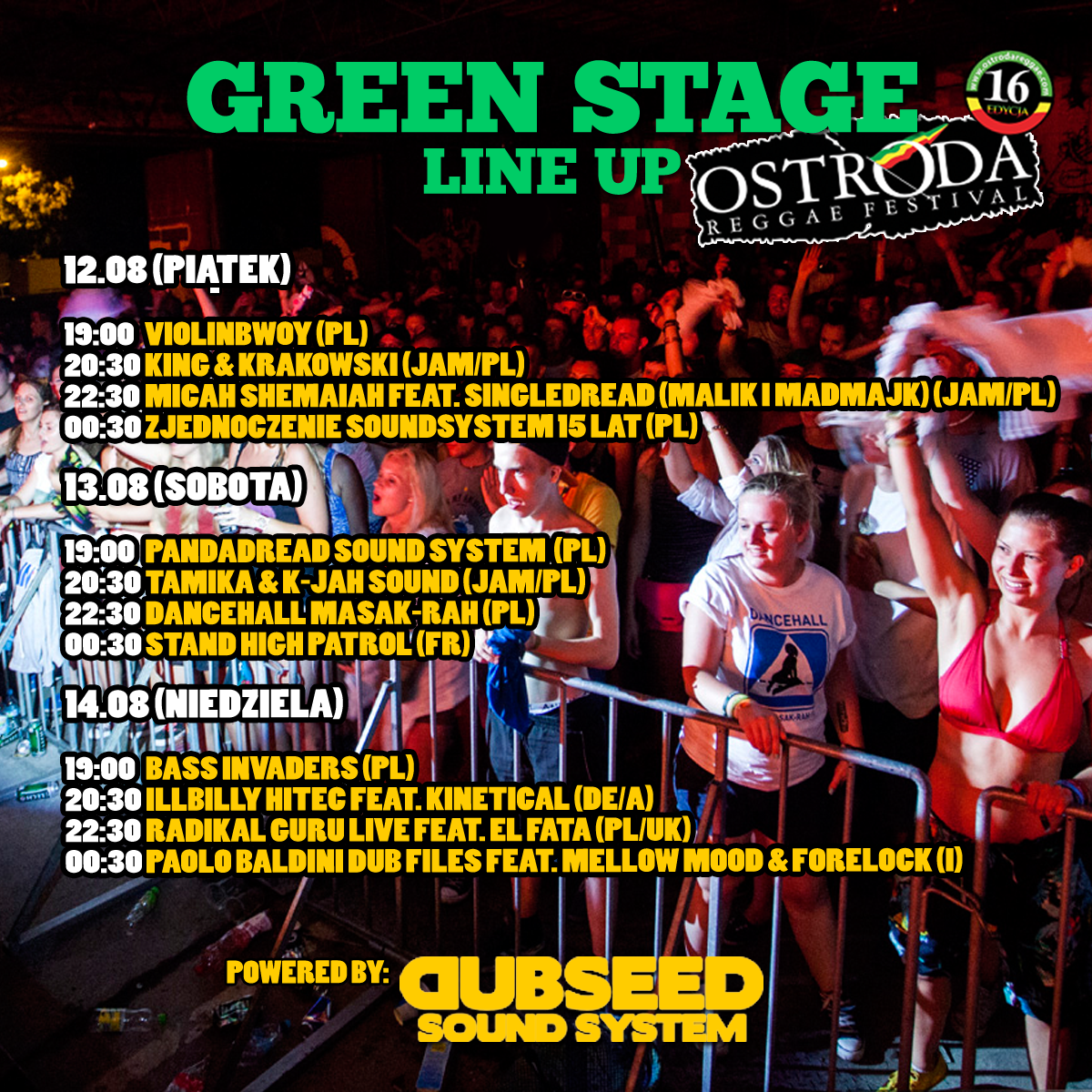 We present a full lineup of Green Stage at Ostróda Reggae Festival. It’s a long list of excellent live-acts, singers, producers and sound systems from Jamaica, Europe and Poland.

Green is the second stage after the Red Stage at Ostróda Reggae Festival. For many years it has been a place for sound systems, producers, singers with DJs. We presented there the biggest names of reggae club culture. The hall where the stage is located is full of bass sound thanks to the largest Polish sound system Dubseed, equipped with tones of power in their speaker boxes and amps.
“This stage is very important for us. Some sound systems enjoy more interest now than live bands. Sound system culture resulting from the combination of the Jamaican musical traditions with clubby vibes is an integral part of Ostróda. We are very proud of this year’s lineup”– says Miroslaw “Maken” Dzięciołowski of Positive Music Promotion.
Green Stage will run for 3 festival days in its current location at the Red Military base. The lineup is very rich and diverse. The fans are looking forward to the performances of French Stand High Patrol with a distinctive vocalist Pupa Jim and Dubfiles session of the most important Italian dub reggae producer Paolo Baldini with, among others, popular singers of Mellow Mood band. Jamaica is represented by the rising star of the reggae revival movement Micah Shemaiah, Gentleman’s backing vocalist Tamika and King, the singer living in Cracow. Pride of the Polish dub / dubstep scene, Radikal Guru this time appears with a new formula of live dub mix, including live brass section and the British singer El Fata. Polish heavy dub sound of Moonshine Recordings will be also represented by talented violinist and producer Violinbwoy and Gdansk activists Pandadread Sound System. Zjednoczenie Sound System with Pablopavo, Krzak and Diego will intensively celebrate their 15th anniversary. The only crew that can compete with them in high dancehall-reggae energy flow is Dancehall Masak-Rah with 27Pablo and Junior Stress at the forefront. Illbilly Hitec are known to the world as electro ragga dub champions from Berlin. This world begins to discover talented Polish reggae producers like Krakowski or K-Jah, who can be also heard on the Green Stage.
The sweat will pour again, and that’s our aim.
The only good system is sound system.
Welcome!