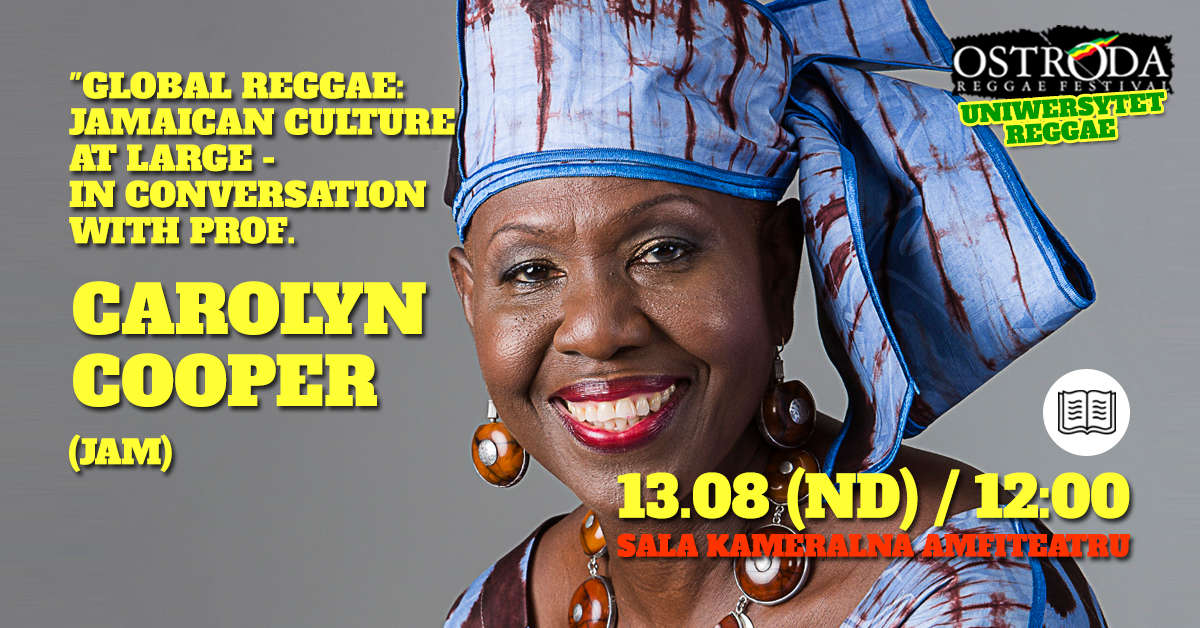 Have a look at the educational programme that we have prepared this year. Feel invited to attend free meetings with outstanding guests and participate in unique film screenings!

Chamber Room of the Ostróda Amphitheatre, 17a Mickiewicza Street, Ostróda

Exhibition Opening followed by a meeting with Maria Papaefstathiou (Greece) 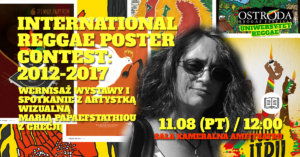 Maria Papaefstathiou is a visual designer and blogger from Athens, Greece. Co-founder of the International Reggae Poster Contest; founder and curator of graphicart-news.com blog; art representative of Freestylee-Art Without Borders (http://www.freestylee.net/). Maria focuses her personal work on poster design but also undertakes other graphic design works. Her portfolio can be seen at www.itsjustme.net.

Maria has been participated in group exhibitions around the globe, among others in USA, Spain, UK, Jamaica, Greece, South Africa, South Korea, Turkey, Poland, Belgium, and China.

Established by the designers Michael Thompson aka Freestylee Artist Without Borders from Jamaica and Maria Papaefstathiou from Greece, the contest aims to build awareness of reggae music and to celebrate the global achievements of reggae and its impact to the world.

The poster contest was organised as an international platform to showcase a far-reaching vision: to establish a world-class “Reggae Hall of Fame Museum and Performance Centre” in Kingston, Jamaica that celebrates the voice, vision and vocabulary of reggae and related musical genres like ska, dub, rock steady, roots reggae and dancehall.

The catalyst and centerpiece of this vision is reggae.

The International Reggae Poster Contest (IRPC) is the start of a global campaign that takes advantage of the powerful tools of social media and creative expressions through the medium of the visual arts.

The second objective of the IRPC is to help raise global awareness for Alpha Boys’ School, the vocational institution for underprivileged youths located in Kingston, Jamaica, and founded in 1880 by the Sisters of Mercy.

This school is a great Jamaican success story, producing some of the most notable legends in the history of reggae including Don Drummond of the Skatalites, Tommy McCook, and Yellowman.

This remarkable institution should be celebrated and supported by all those who admire and love reggae. Without this fertile training ground, we might not have this global music we call reggae. 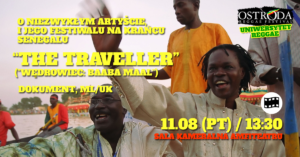 Baaba Maal has been on the road for 40 years, but always returns to his birthplace. In his home country, Senegal, he remains a star, but his albums are also well-known across the world. His music blends African tradition with electronic music. This body of work speaks volumes about his personality and in turn is expressed in the Blues Du Fleuve Festival, his creation in Podora. Here is the meeting place of people and cultures; here sounds, dance and fashion interact. „I believe in music and its power” – declares Maal and his commitment, passion and determination validates this statement. The festival also attracts foreign stars like Winston Marshall of Mumford and Sons or Freddie Cowan of The Vaccines. The audience watches this unique event, but also admires the beautiful riverbed town scenery. „The river always speaks” – Maal recalls his inspirations. Without a doubt, he listens to what it says, much as we cannot help but be blown away by the unique soundtrack.

“History of Reggae in Germany” 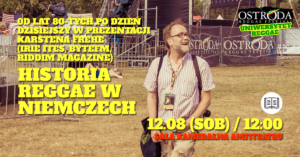 The lecture will present the development of the Reggae scene in Germany from the beginning until now. German bands that started to perform in the 1980s, sound systems developing over the years, the big hype at the beginning of the new millennium and a look at the situation of today. Karsten Frehe, born 1966, art teacher and author, father of three kids and reggae enthusiast. Founded Irie Ites (Germany) in 1995 as a radio show (later a sound system, an online mag and a label were started). Now he lives and works in Hamburg. Host of the radio show “Forward the Bass” at ByteFM and author for the Riddim Mag. 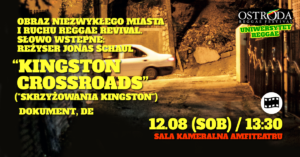 Kingston, the capital of Jamaica is one of the most diverse and controversial cities in the world. This documentary is a captivating and personal ramble through Kingston’s contemporary roots reggae scene which currently experiences an impressive and increasingly noticed revitalization of Rastafari culture. At the same time “Kingston Crossroads” discovers moving personal life stories driven by various challenges. Such as taxi driver Leroy’s touching life story which reflects the destiny and struggle of many Jamaicans, too. “Kingston Crossroads” – a snapshot of Jamaican society in a globalised world, told by Jamaicans.

Jonas Schaul studied film at the University of Fine Arts in Hamburg, Germany. Mentoring professors were Pepe Danquart and Wim Wenders. He realized several own projects, among them a long-term documentary about the life of West-African migrants in Germany shot in Guinea and Germany, a film about the struggle of endangered subculture-clubs in Hamburg and the documentary Kingston Crossroads. He works for different film-, cinema- and television productions and as a media and art teacher. Content of his films are mostly social, political, cultural topics. 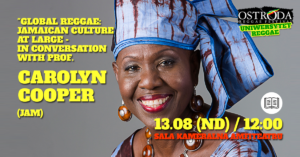 Carolyn Cooper is the author of two influential books – Sound Clash:  Jamaican Dancehall Culture at Large (2004) and Noises in the Blood:  Orality, Gender and the ‘Vulgar’ Body of Jamaican Popular Culture (1993).  With Eleanor Wint, she is the co-editor of Bob Marley:  The Man and His Music (2003).  She is the editor of the award-winning Global Reggae (2012). Cooper writes a weekly column for the Sunday Gleaner that is posted on her bilingual blog, “Jamaica Woman Tongue.” She has appeared in numerous documentaries on Caribbean culture produced by a wide range of local and international media houses such as Television Jamaica, the BBC, Al Jazeera and the Australian Broadcasting Corporation.

“Weapon is my Mouth” 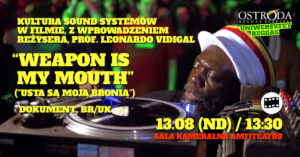 Directed by Leonardo Vidigal and Delmar Mavignier, “Weapon is My Mouth” brings outstanding live performances of sound systems and reggae artists, as well as interviews with MCs, singers, DJs, dancers, producers and other members of this vibrant scene that is taking place in United Kingdom, France, Italy, Spain, Poland and other countries, in several annual festivals. It was filmed with cameras and lenses suitable for shooting in low light, to avoid the use of artificial lighting (used only in interviews) and singers, MCs and the sound systems themselves were recorded in direct sound, so the interaction between the audience, artists and soundmen was shown in its fullness. This film is one of the results of the postdoctoral research “Culture sound-system and audiovisual works in Britain: occupying loudly the streets and the screens”, developed by professor and researcher of UFMG Leonardo Vidigal in London between July 2015 and August 2016. 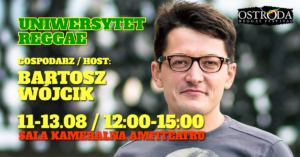 Reader, translator, and cultural manager. Works at the Centre for the Meeting of Cultures in Lublin (spotkaniakultur.com), co-founder of the Kaiser Söze Foundation (kaisersoze.pl), collaborates with the History Institute of the Polish Academy of Sciences. Author of “Afro-Caribbean Poetry in English: Cultural Traditions 1970s-2000s” (Peter Lang, 2015), curator of “Reggae Faces” (2016) – Bartek Muracki’s portrait photography exhibition.