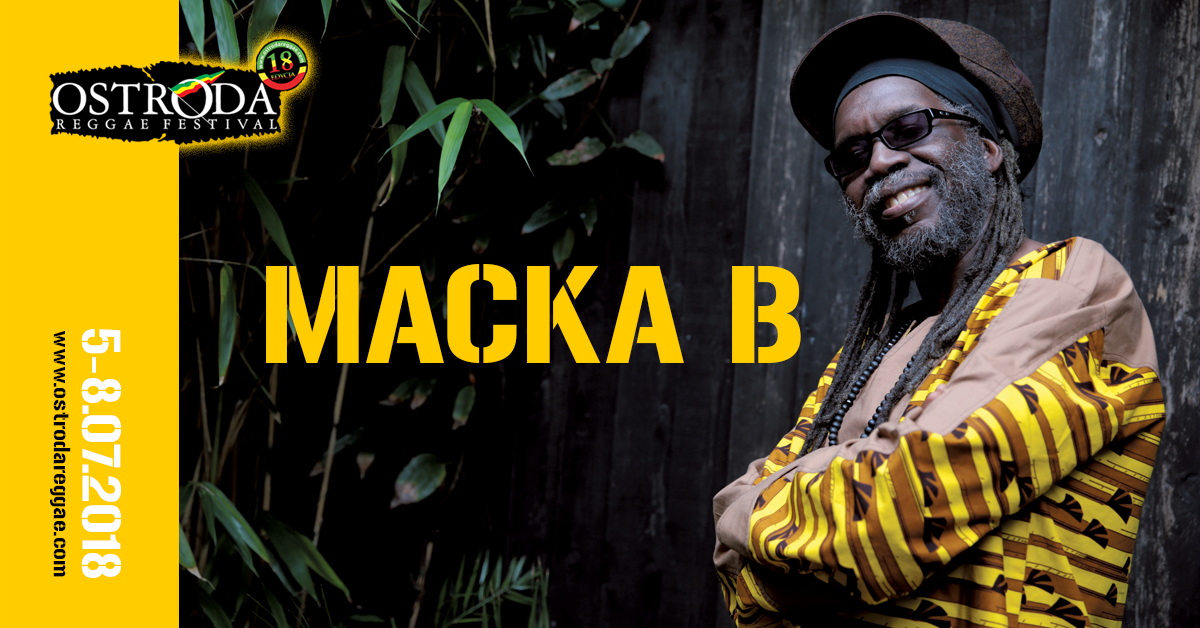 For over 30 years, his toasting brings awareness and education not only to the black community in the UK. He has become a global symbol of veganism and a healthy lifestyle. For the first time in Ostróda, Macka B will present his latest album “Health is Wealth”.

Macka B is one of the most influential contemporary British reggae vocalists. He is famous for his clear and direct message and most of his lyrics are about important social and spiritual issues. His first album “Sign of the Times” (1986) still remains a UK reggae milestone.

Macka B (Christopher MacFarlane) was born near British Birmingham. In childhood, he played cello and sang in a school choir, but soon discovered true love for reggae. He was impressed by such great toasters like U-Roy, I-Roy, Big Youth, and in particular Prince Far I. Together with some friends he started his first sound system called Exodus. In 1982 he went on a trip to Jamaica to experience a developing dancehall scene there. Inspired by this experience, he won a competition for ambitious DJs a year later, which resulted in several radio appearances and a single “Maggie’s Letter” with the Pre-Wax band. He became active in the local sound system scene. Macka B’s first single was “Bible Reader”, released in 1985 for the legendary Fashion Records. In the beginning of his career, Macka B worked with Mad Professor and the majority of his albums was released by Ariwa Records. In 1988 Macka B visited Jamaica again, where he recorded with Black Scorpio. A year later he released “Buppie Culture” featuring big hit “Dread A Who She Love” with the female singer Kofi. The song reached the top of UK reggae charts. He made it again with “Proud of Mandela” in 1990. In 1991-1992, Macka B was voted twice the best male DJ in the UK.

Despite passing years, Macka B does not stop – he still records, performs shows, critically observes the reality and always has something important and interesting to share. He was one of the first foreign reggae artists to play Poland in the 1980s. Then he returned many times, performing successful shows at Soundedit in Łódź, Kluczbork’s Stolica Reggae Festival or Róbrege in Warsaw. In recent time, thanks to unbelievable viral success of humorous videos, he became an ambassador of healthy cuisine all over the world. This was confirmed by the release of his first album for VP Records – “Health is Wealth” last year. It is just … 24th full-length album in his career!

Power to the People