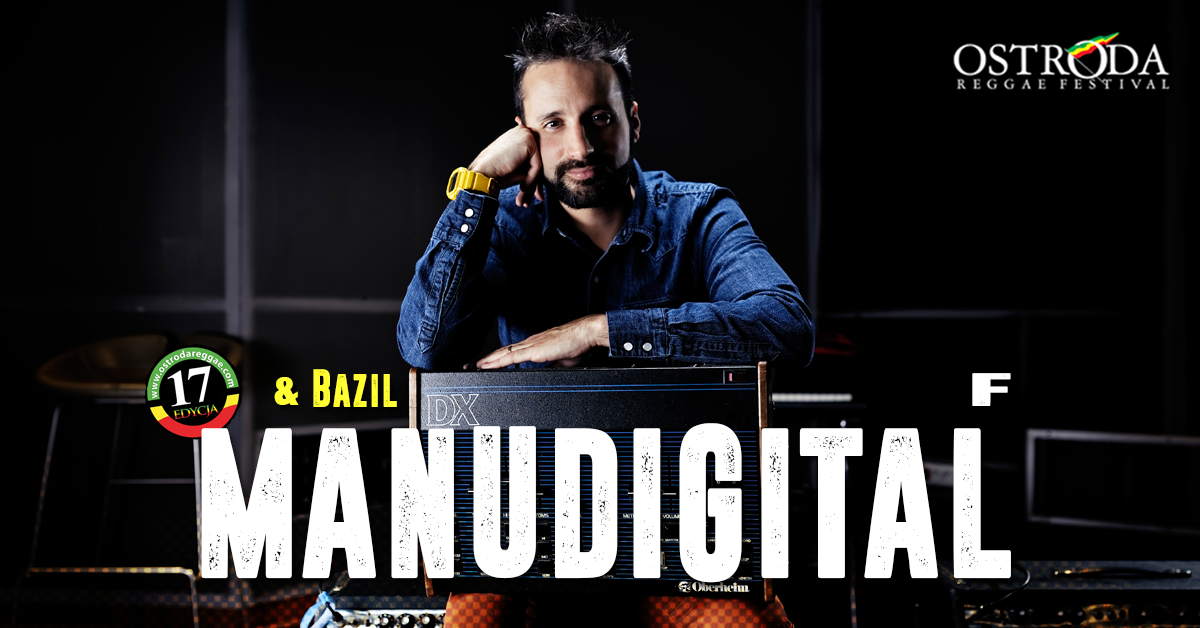 The real master of style, known for his great music and millions of video views comes first time to Poland for a session, alongside his very experienced MC. Real digital revolution is here!

Supported by confirmed musicians in his family and two brothers playing guitar, Manudigital started playing bass guitar at the age of 13. In 1994 he joined his first reggae band called Jahrmony. His first sound system was called Digital Sound. He also hosted a reggae radio show called “Ragga Addiction”. Manudigital studied at the American School of Modern Music in Paris. Next to his academic life as a student he already had got a place on stage alongside the big French reggae names like Nuttea, Big Red etc. In 2010 he joined Babylon Circus and he visited 25 countries with them. From 2012 onwards he defined himself more as a “riddim maker” than anything else. His video series, the “Digital Sessions”, where only him and the artist appear, geared with the mythical synth Casio MT40, got hundreds of thousands of views within a very short period of time, thanks to amazing artists like Pupajim, General Levy, Soom T among the others. After having composed loads of hits for Biga Ranx, Manudigital joined his full band and produced his “Nightbird” album. Manudigital stays very active in his lab, composing for many different labels and many artists like Sizzla, Jah Mason, Skarra Mucci, General Levy, Mr Perfect, Agent Sasco, Turbulence, Bush Man, Lt Stitchi, Papa Michigan, Jah Vinci, Chezidek, Queen Omega… 2015 marks new video concepts like the “Inna Mi Room” and “Back Inna Days”. Same year he released 3 EP series entitled “Digital Lab” with George Palmer, Peter Youthman & Marina P. In 2016 Manudigital released his first solo album “Digital Pixel” featuring Soom T, Taiwan MC, Flavia Coelho, Jamalski, Danakil, Sara Lugo, Joseph Cotton, King Kong & many more. His recent release is EP “Manudigital feat. Joseph Cotton & Friends”.

Also coming from France, Bazil started to write his own songs at the age of 15. He discovered Caribbean culture thanks to DJ parties, Soundsystems and Dubplates. In 2008, Bazil decided to stop his studies to be totally devoted to his passion. He moved to New York to improve his English and to develop his musical knowledge. He participated in open mic events with American rappers and met several Jamaican artists. In 2010 he recorded his first album “Stand up Strong” in Jamaica with Sherkan. He participated in “One Riddim” compilations with major names like Sizzla or Lutan Fyah. Two years later he returned to Jamaica to record again and brought back songs like “Together Tonight”, recorded at Tuff Gong. In 2015 Bazil released his EP “High on Music”, composed of 10 reggae, hip hop and dubstep songs that he created himself between Paris, Kingston and Chicago. In 2016, Manudigital asked him for a collaboration on his album “Digital Pixel”. Their song “Digital Luvin” was the first single of this album. As they worked together in the past, ManuDigital naturally offered Bazil to join his team as MC on the “Pixel Tour”. They performed together hundreds times on French and international stages, like the Outlook Festival in Croatia, the Boomtown Festival in England or in Costa Rica’s clubs.