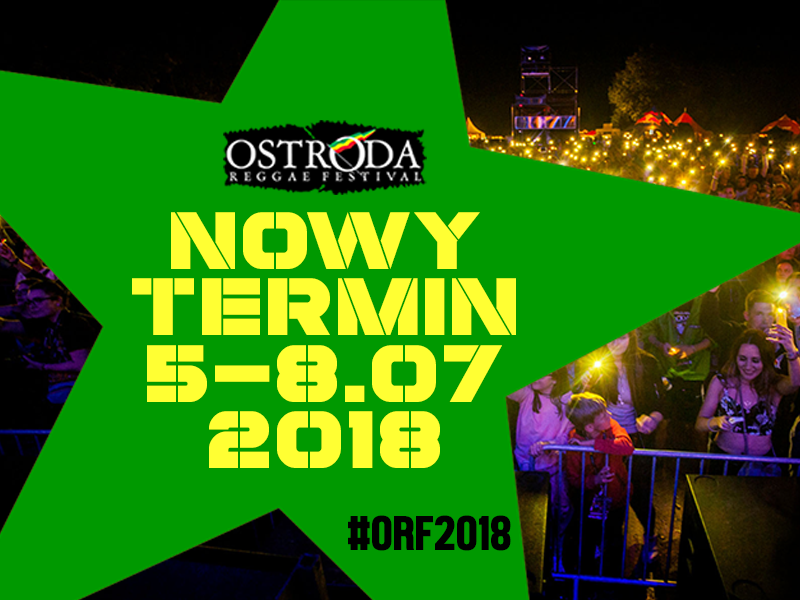 Ostróda Reggae Festival with its 17-year history is a leading Polish celebration of music and culture originating in Jamaica. The success of the festival is a proof for the attractiveness and universalism of reggae message. ORF has gained a global reputation, appreciated by fans and artists in many parts of the world. Works on the 18th edition, celebrating entry into adult age, are proceeding. In 2018 the Festival will take place on completely new dates: 5th – 8th July 2018 and as always will start with a show at the Ostróda’s Amphitheater.

“We decided to move the festival to July due to the closeness of dates with the second major Polish reggae event – Regałowisko in Bielawa. This year Płock’s Reggaeland has ceased to exist, giving us the opportunity to use their dates. July feels like new opportunities, so we decided to take that step and we believe our fans will follow us” – commented the Festival’s director, Piotr “Piter” Kolaj of Positive Music Promotion. “We have some new ideas and we’re already discussing first Festival slots. We will keep informing about details as the preparations progress” he adds.

Keeping in mind the success and the level of the event in previous years, it is definitely worth to wait!

From the small courtyard of the Ostróda’s Castle, through the “White Military Base” to the unique area of ​​a deserted military facility in the city center – “Red Military Base”, the festival has come a long way. Always associated with a beautiful Mazurian city, whose name for many people has become synonymous with reggae.

2017 edition will be remembered for great headliners’ shows. Shaggy was there for the first time. You could see real reggae legends like Steel Pulse and Big Youth or modern approaches to Jamaican music like The Skints and Dreadzone. Poland was represented by the leading artists: Mesajah, Tabu, Grubson or Vavamuffin. The best Polish reggae musicians and artists performed together a special ‘Tribute to Bob Marley’ show.

During 4 festival days more than 30 performers appeared at Red and Green Stages and over 20,000 people attended the festival.

At the Ostróda’s Amphitheater, annual meetings and film screenings were held at the Reggae University. One of the guest was Professor Carolyn Cooper – journalist, writer, university lecturer and one of the most prominent reggae authorities in Jamaica. There was an exhibition of International Reggae Poster Contest prepared by the Greek curator Maria Papaefstathiou. Two full-lenght music documentaries had their official Polish premieres. Dancehall dance workshops and African drumming lessons were held daily. There was a creative activity zone for children and a chillout area. You could improve your consciousness at the stands of pro-ecological NGOs.

Enthusiastic reports from the Festival were published in the largest world’s reggae portal Reggaeville.com, as their journalists re-visited the festival. One could read on Ostróda in the largest Jamaican daily Jamaica Gleaner.

ORF invariably enjoys the opinion of a creative event – not only provides an opportunity to see the main stars of the genre, but also discovers artists unknown in Poland, promotes new phenomena and educates.

For years the Festival has been gathering a wide audience standing for peaceful coexistence and social awareness, from young people to families with small children, making it a truly family feast. Local police report confirming that during the event no single case of breaking the law was observed became a real viral on Internet.