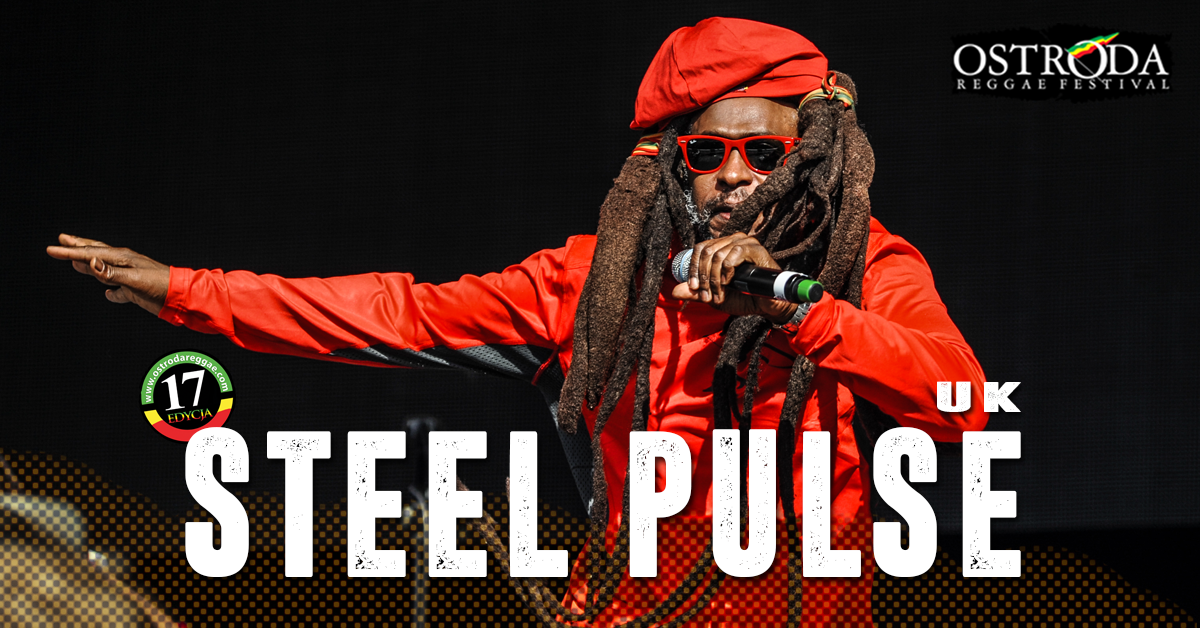 Formed in 1975 in Birmingham, the Grammy – winning reggae band remained close to their roots. They have continued their commitment to fighting injustice, educating the masses, and promoting positive messages through spiritually uplifting music. Solid foundation of UK roots music is back, 11 years after their first show in Ostróda.

Steel Pulse is a roots reggae band, formed in 1975 at Handsworth Wood Boys School, in Birmingham, England, composed of David Hinds (lead vocals, guitar), Basil Gabbidon (lead guitar, vocals), and Ronald McQueen (bass). Their debut release, Kibudu-Mansatta-Abuku arrived on the small independent label Dip, and linked the plight of urban black youth with the image of a greater African homeland. Steel Pulse were initially refused live dates in Caribbean venues in Birmingham because of their Rastafarian beliefs. Aligning themselves closely with the Rock Against Racism organization and featuring in its first music festival in early 1978, they chose to tour with sympathetic elements of the punk movement, including the Stranglers, XTC, The Clash, and The Police. Eventually they found a more natural home in support slots for Burning Spear, which brought them to the attention of Island Records, the label of Bob Marley. Their first release for Island was „Ku Klux Klan”, a considered tilt at the evils of racism, and one often accompanied by a visual parody on stage. „Handsworth Revolution” was an accomplished long-playing record and one of the major landmarks in the evolution of British reggae. Steel Pulse went on to open for Marley on a European tour, to great critical acclaim. Their received Grammy for „Babylon The Bandit” and were nominated for „Earth Crisis”, „Victims”, „Rastafari Centennial” oraz „Rage & Fury”. In 1989, the group contributed “I Can’t Stand it” to the soundtrack of Spike Lee’s film “Do The Right Thing”.

In 2004, Steel Pulse returned to their militant roots with „African Holocaust” – their eleventh studio album. With guest appearances by Damian Marley, Capleton, and Tiken Jah Fakoly, the album is a collection of protest and spiritual songs, including “Global Warning” (a dire warning about climate change), “Tyrant”, a protest song against political corruption, and “No More Weapons”, a classic anti-war song. Also featured on the album is the Bob Dylan classic “George Jackson”. In 2010, they released a single „Hold On 4 Haiti” – 100% of the proceeds go to Haiti. The band continues to tour, and is working on another studio album.

Steel Pulse – Door Of No Return