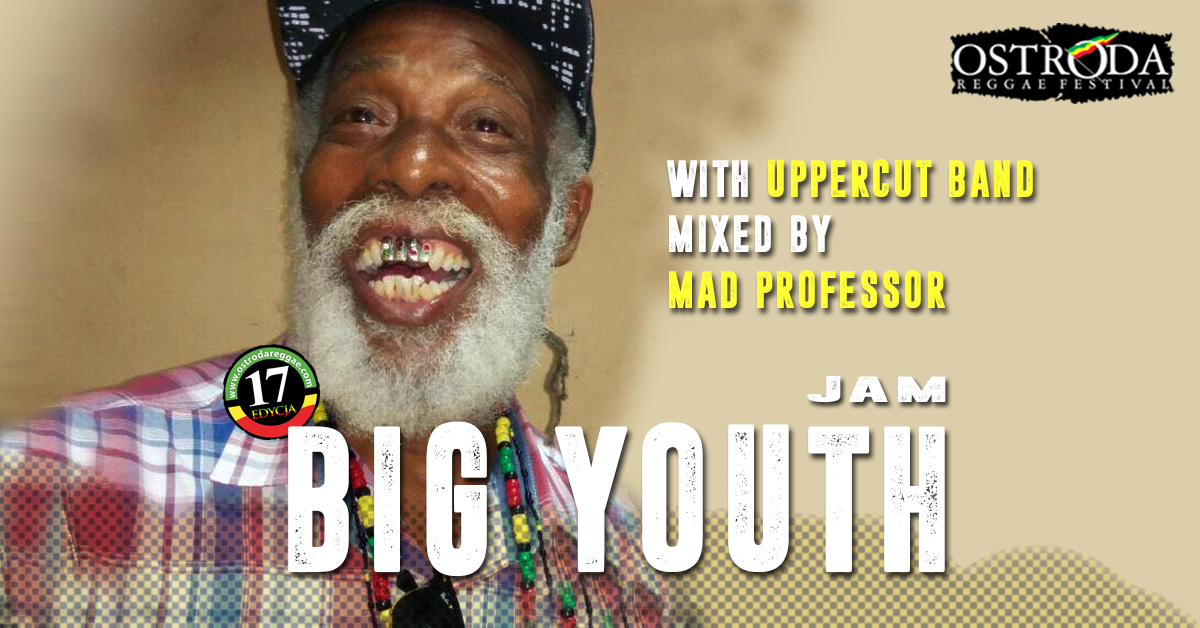 Big Youth is one of the most legendary names in the history of reggae. His original deejaying style born in early 70’s cannot be mistaken. Responsible for thousands of songs, still active and strong, will hit Poland first time with Uppercut Band and dubbed by Mad Professor, the mixer wizard.

Before beginning his musical career, Buchanan worked as a diesel mechanic at Kingston’s Sheraton Hotel, where he would develop his toasting skills while he worked, and was nicknamed “Big Youth” by his co-workers. He started to perform at dances, initially influenced by U-Roy, and became a regular with Lord Tippertone’s sound system by 1970, becoming the resident deejay, and attracting the attention of Kingston’s record producers. By 1972 he had begun working with Augustus “Gussie” Clarke, a teenage producer whose rhythms and singers were more in tune with the vibes on the streets of Kingston, and “The Killer” became his first major Jamaican hit, soon followed by “Tippertone Rocking”. The first album to feature his vocals, Chi Chi Run was produced by Prince Buster in 1972. Distinctive musically, his half-sung style contrasting with his contemporaries, he was also visually distinctive, with his teeth inlaid with red, gold, and green jewels.

In 1973 he released his first album entitled “Screaming Target”, produced by Gussie Clarke. The album is still considered as a classic of its genre, featuring rhythms from well-known hits by Gregory Isaacs, Leroy Smart, and Lloyd Parks, among others. Around this time, he also notched up some achievements in the singles chart, having seven singles in the chart at one time, and having four singles remain in the top 20 for an entire year.

His first self-produced LP was Reggae Phenomenon in 1974. His self-productions continued with Natty Cultural Dread in 1976, followed later that year by Hit the Road Jack. Having recorded only deejaying records initially, by now Big Youth was developing more confidence as a singer. He signed to Virgin Records’ Frontline label in 1977 and appeared in culty “Rockers” movie.

The modern digital rhythms were far from suited to Big Youth’s style, and his forays into the studio became less frequent and his success during the 1980s was limited. His career revived in 1990, with the “Chanting” single and “Free South Africa” on the protest album “One Man One Vote”.

Big Youth has been always an inspiration of the punk movement in UK in 70s and became one of the most sampled reggae voices.

Nowadays he continues to record and perform and he works with many producers, including Mad Professor who released his “London’s Burning” on his Ariwa Records.

Ten Against One – Live at Reggae Sunsplash ’82

One thought on “BIG YOUTH (Jamaica)”